JFETVARIABLEATTEN1.CR Download the SPICE file Some designs call for a variable resistor such as variable gain amplifiers, attenuators and some guitar effect boxes. The main goal here is device whose resistance is some function of bias voltage. One such device is your basic JFET. A voltage-controlled resistor (VCR) may be defined as a three-terminal variable resistor where the resistance val-ue between two of the terminals is controlled by a voltage potential applied to the third. For a junction field-effect transistor (JFET) under certain operating conditions, the resistance of the drain-source. 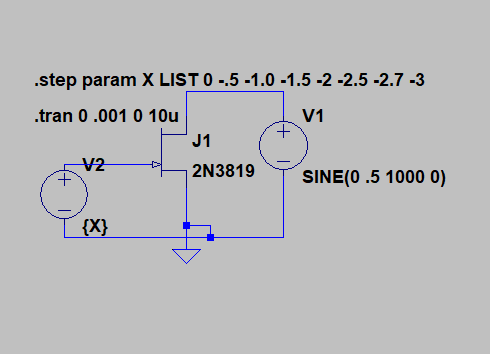 The JFET is one of the more common active devices used for the design of voltage-controlled resistors. So much so, that JFET devices are packaged and sold as voltage-controlled resistors.[21] Typically, JFETs when they are packaged as VCRs often have high pinch-off voltages, which result in a greater dynamic resistance range. JFETs for VCRs are often packaged in pairs, which allows VCR designs that require matched transistor parameters.

Another reason discrete JFETs are used is that JFETs are better suited for rugged environments. JFETs can withstand electrical, electromagnetic interference (EMI) and other high radiation shocks better than MOSFET circuits.[23] JFETs can even serve as an input surge-protection device.[24] JFETs are also less susceptible to electrostatic discharge than MOSFETs.[25]

In the circuit on the figure, a non-linearized VCR design, the voltage-controlled resistor, the LSK489C JFET, is used as a programmable voltage divider. The VGS supply sets the level of the output resistance of the JFET. The drain-to-source resistance of the JFET (RDS) and the drain resistor (R1) form the voltage-divider network. The output voltage can be determined from the equation

With a 4-volt input signal and R1 of 300 ohms, the range of resistance for the JFET VCR can be calculated from the simulation results as VGS varies between −1 volt and 0 volts using the equation

Applying a ramp voltage to the input of a similar VCR circuit (the load resistor has been changed to 3000 ohms) allows one to determine the exact value of the resistance of the JFET as the input voltage is varied.

The ramp simulation, below, reveals that the drain-to-source resistance of the JFET is fairly constant (about 280 ohms) up until the input sweep voltage, Vsweep (Vsignal), reaches about 2 V. At this point the drain-to-source resistance starts to rise slowly until the input voltage reaches 8 V. At around 8 V, for this bias condition (VGS = 0 V and R = 3 kΩ), the JFET drain current (ID(J1)) saturates, and the resistance is no longer constant and changes with an increase in input voltage. The ramp simulation also indicates that even below 2 V, the VCR's resistance is not completely independent of the input voltage level. That is, the VCR resistance does not represent a perfectly linear resistor.

Because the resistance is not constant above 2 V, this non-linearized VCR design is most often used when the input voltage signal is below 1 V, such as in sensor applications or in applications where distortion is not a concern at higher input voltage levels. Or in other cases, when a constant resistor value is not required (for example, in LED dimmer applications and musical pedal-effect circuits).

To increase the dynamic range of the input voltage, maintain a constant resistance over the input signal range, and to improve the signal-to-noise ratio and total harmonic distortion specifications, linearization resistors are used.

A linearized VCR design is shown in the figure below.

For the evaluation of this design's ability to handle larger input signals, a ramp is applied to the VCR input. From the results of the ramp simulation, how closely the VCR emulates a real resistor and over what range of input voltages the VCR behaves as a resistor is determined.

The linearized VCR ramp simulation, below, indicates that the VCR resistance is constant at approximately 260 ohms for an input signal range from about −6 V to 6 V (the V(Vout)/I(R1) curve). The sweep also indicates that the VCR resistance starts to dramatically increase, as does in the non-linearized design, once the JFET enters its saturation region.

Because of the linearized VCR's wider constant resistance region, much larger input signals than the non-linearized designs can be applied to the VCR without distortion. However, it is also important to consider that the drain resistor value will slightly affect the range of drain-to-source voltages that the VCR resistance is constant.

Because of the increased linearization range, the linearized circuit is able to handle AC signals that are in the order of 8 V peak-to-peak before visual levels of distortion set in. The simulation below, which uses a 3000-ohm drain resistor, illustrates that the VCR can be successfully used at fairly high input voltage input signals. For this design, the 8 V peak-to-peak input voltage signal can be attenuated from 2.2 volts peak to 0.5 volts peak when the control voltage is varied from −2.5 volts to 0.5 volts.

Different JFETs can be used to obtain different VCR resistance ranges. Typically, the higher the IDSS value for a JFET, the lower the resistance value obtained. Similarly, JFETs with lower values of IDSS have higher values of resistance.[27] With a bank of JFETs, with different IDSS values (and hence, RDS values), banks of programmable automatic gain-control circuits can be constructed that offer a wide range of resistance ranges. For example, the LSK489A and LSK489C, graded IDSS JFETS, show a 3:1 resistance variation.

Distortion is a major concern with voltage-controlled resistors. When an AC or non-DC input signal is applied that results in the VCR resistor moving out of the linear triode region (or operated in a less than perfectly linear triode region), uneven amplification of the input signal results (as a direct result of a non-linear increase in resistance). This results in distortion of the output signal.

In order to overcome this problem, non-linearized VCRs are simply operated at fairly low signal levels. Linearized VCR designs, on the other hand, will have significantly less distortion at much higher input voltage signal levels and allow an improvement in total harmonic distortion specification.

For example, the simulation below shows a significant amount of visual distortion when the input signal of 5 V peak-to-peak is applied to a non-linearized VCR design.

On the other hand, a simulation of a linearized VCR design shows very little distortion when a 8 V peak-to-peak input signal is applied (Figure 7).

Other VCR topologies and designs[edit]

Besides these more basic VCR designs, there are numerous more sophisticated designs. These designs often include a differential difference conveyor current (DDCC) circuit, a differential amplifier, two or more matched JFET transistors or one or two op amps. These designs offer improvements in dynamic range, distortion, signal-to-noise ratio and sensitivity to temperature variations.[28][29] 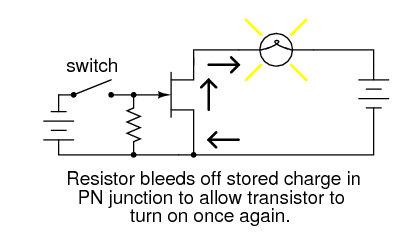 The current–voltage (IV) transfer characteristics determine how the JFET VCR will perform. Specifically, the linear regions of the IV curves determine the input signal range where the VCR will behave as a resistor. The curves of a specific JFET also dictate the range of resistor values that the VCR can be programmed to.

For values of VGS near zero, the drain-to-source voltage linearization voltage or triode breakpoint is much higher than when VGS levels are near the pinch-off voltage. This means in order to maintain constant resistor behavior for different values of VGS, the maximal linearization value would be set according to the highest value of VGS used.

Conversely, when linearization resistors are used, a similar IV curve swept simulation indicates that the linear triode region is significantly extended. From the IV curves, one can see that the linearization region for the linearized design extends easily from −6 V to 6 V (the IDS versus VDS versus Vin curves). Far above the approximately 200 mV range the non-linearized design produces.

Of further interest is that the linearization results in linearization of the gate-to-source voltage even though the input voltage (Vin) is held at a constant DC level during each of the sweeps. This is because as the input voltage changes, the value of the VGS voltage changes such that VGS is always equal to one-half VDS. The change in VGS for changes in VDS is such that the JFET behaves as a resistor up until the point where the JFET saturates.

The future of voltage-controlled resistors[edit]

Everyday and high-performance VCRs are essential to the successful design of many analog electronic circuit designs and will continue to be so. VCR designs are expected to play a central role in the advancement of artificial intelligence (neural) based sensor networks.[31] The VCR, basically the heart of the synaptic cells in a neural network,[32] is necessary to enable high-speed analog data processing and control of information that microcontrollers, digital-to-analog converters and analog-to-digital converters presently do. 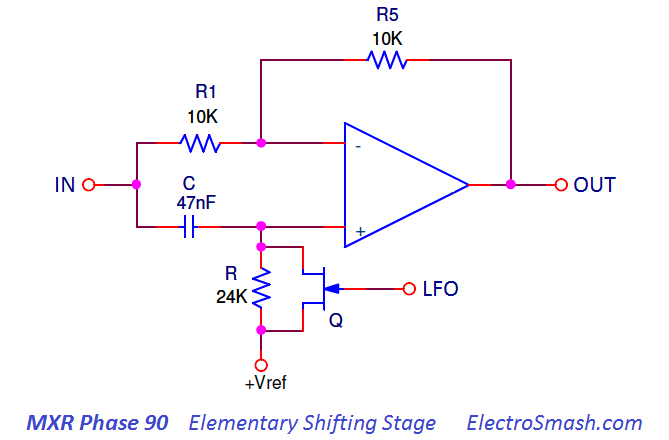 Low-noise JFETs because of their low-signal sensitivity, electromagnetic and radiation resilience, and their ability to be configured both as a VCR in a synaptic cell and as a low-noise high-performance sensor preamplifier, offer a solution to the implementation of artificial-intelligent-based sensor nodes. This is a natural extension of the fact that low-noise JFETs and low-noise JFET circuit topologies are extensively used in the design of low-noise VCRs and low-noise preamplifiers in sensor measurement applications.[33][34]