Opera GX is the world's first browser for people who play and love computer games. There are currently more than 1.2 billion PC gamers worldwide, but no one has ever thought of providing them with a web browser targeted to their specific needs. Opera GX is a special version of the Opera browser built specifically to complement gaming. It lets gamers control their computer’s CPU and memory usage to make gaming and streaming smoother. It features Twitch integration and numerous customization options. The most gaming-specific feature is the “GX Corner” tab. Clicking the controller-shaped icon at the top of Opera GX’s sidebar opens a window with recent gaming-related news stories, links to. What Is Opera GX? Opera GX is a desktop web browser for Windows PCs. Despite the name, it’s a browser meant for use within games, as Steam’s built-in browser works in the Steam overlay. It’s not available for game consoles like the Xbox One or PlayStation 4, either.

Opera GX is now ready to run on your Mac. According to a representative study conducted by Opera on gamers in the US, 14% of people play computer games on their macOS devices, while 82% use Windows machines. Although not dominant on the market, Mac remains a relevant gaming environment. The macOS version of the world’s first gaming browser is now available for download in early access mode.

Almost half of gamers experiencetechnical issues while playing games. Opera GX solves them

Opera conducted a survey to find out moreabout gamers as well as understand which problems they encounter while playinggames.

49% of people experience some technicalissues: 30% are troubled by network problems, 26% by RAM issues and 14% runinto CPU trouble.

Both on Mac and Windows, Opera GX offers aunique set of features that provides solutions to these problems. The set ofbrowser limiters, which includes a Network Bandwidth Limiter, as well as CPUand RAM Limiters, prevents the browser from becoming resource-hungry. What thismeans in practice is that everyone’s machines are left with more resources forrunning games.

“OperaGX’s set of features is unique and relevant to every person who is seriousabout games. Ever since the launch ofthe Windows version during E3 in Los Angeles, we have been receiving manyrequests from gamers to add Mac support. We are happy to now be bringing theunique GX experience to macOS users,” said Maciej Kocemba, product directorof Opera GX.

The younger you are, the more youplay 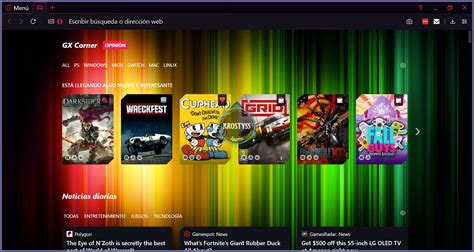 According to the results, 65 percent of thosesurveyed follow games on YouTube, followed by 25% using Twitch and 12%resorting to Mixer, with some overlap.

Regardless of the platform one follows, OperaGX’s Network Limiter allows users to reduce the network bandwidth used by theirbrowser to stream or watch gameplay, ensuring that they are able to playwithout lag. The special Twitch integration in the sidebar allows everyone tofollow their favorite streamers while the Video pop-out function allows peopleto play YouTube or other videos on top of the game they are currently playing.

16% of American gamers typically try a newgame every day, while 64% do so twice a month or less frequently. Currently,the most popular game is Minecraft, followed by Fortnite, World of Warcraft andNBA2K.

Opera GX includes a dedicated GX Corner – aspecial space with news about games, upcoming game releases, as well as thebest deals and discounts from all over the web.

US gamers love a personalizeduser interface

Opera GX also includes a personalized userinterface, which allows gamers to adjust the browser to their color preferencesand match their gaming setup. The newest version on both Windows and Mac alsoincludes a set of new, specially designed wallpapers.

Opera GX is available in early access mode,which means it is still being shaped based on feedback from users. You can usethe feedback buttons in the browser to provide your feedback about particularfeatures.

The world’s first gaming browser, Opera GX, isavailable for download on both Mac and Windows at www.opera.com/gx

“Opera GXis built for people who love games and spend a lot of time building their setups. We want to give them a browser to perfectly match their beautiful machines. I have a strong feeling this browser will resonate with the gaming world,” said Krystian Kolondra, EVP at Opera browsers.

Opera GX features a new, gaming-inspired design and an array of features that let people not only customize the look of their browser but also limit their computer’s CPU and memory usage.

The GX Control panel is a brand new feature which lets users define how much of their computer’s CPU or RAM they are willing to let their browser use. By toggling on the circle, one can choose to devote a certain percentage of the computer’s resources to the browser. Opera GX will stay within these limits. This means that, unlike other memory-hungry browsers, Opera GX puts gamers in full control of their gaming and browsing experiences.

“Running a game might require a lot of effort from your machine. Even more so if you are streaming while you play. Before Opera GX, gamers often shut down their browsers in order to not slow down their gaming experience. We came up with the GX Control feature to make people’s games run more smoothly without requiring them to compromise on what they do on the Web,” said Maciej Kocemba, product director of Opera GX.

Another handy feature for gamers is Opera GX’s Twitch integration. The browser lets users log into their Twitch accounts directly from the sidebar and will notify them when a streamer they follow goes live.

Opera didn’t stop at designing a browser for gamers. It also created the GX Corner, a place where gaming news from the Web will be presented along with curated gaming deals and information about new and interesting releases.

When you first start or upgrade Opera GX you will be welcomed by sounds and an animation sequence inspired by gaming consoles. The sound effects and musical logo creation in GX are a result of Opera’s collaboration with the sound designer Rubén Rincón and the band Berlinist, who recently received a nomination in the BAFTA Games Awards for the original soundtrack to the GRIS game. The sound effects, as well as most browser features can be adjusted or switched off in the settings panel.

Opera GX comes out of the box with a sleek gaming-inspired design with dark and red elements. Users can also choose a different highlight color from 10 suggested colors or go deeper and choose from 16 million possibilities using the extended color picker feature. 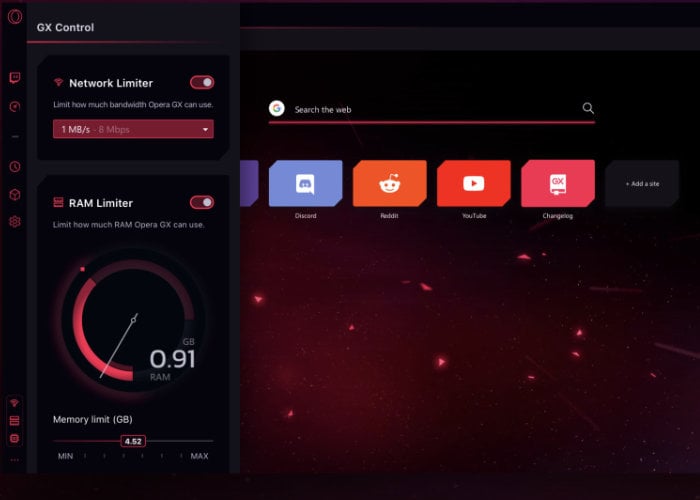 “From the startup sounds to the look of the browser’s speed dial, Opera GX was designed to feel at home on any gaming setup,” added Maciej Kocemba.

Opera GX comes with an exclusive set of wallpapers designed to match the browser and the large displays of gaming setups. It also includes Razer Chroma integration, which means that the keyboard, mouse and other Razer Chroma elements will adjust their colors to the chosen highlight colors in the browser.

Opera’s powerful features are there

Opera GX includes all the features present in the popular Opera desktop browser currently used by 65 million users. This means that, apart from the Twitch integration, users can also activate the Telegram, WhatsApp, Facebook or Vkontakte messengers in the sidebar to stay in touch with friends without the need to open separate tabs.

Opera GX also retains the popular Video Pop Out function which makes it easy to “pop out” a video from the website it is being streamed on and watch it on top of other websites.

“At Opera, we want to set a new standard in browsing,” said Krystian Kolondra. “Today, no other browser is even close to having the kind of feature set you will find in Opera, and we hope people will enjoy the new additions coming with Opera GX”.

The early access to Opera GX for Windows starts today at Level 1, during E3 in Los Angeles. Instead of the usual versions, the browser’s development will progress in levels. The initial early access version is designed for people who love games. They will also have the opportunity to shape the next versions, as Opera’s developers have added special “feedback” boxes throughout the browser, where particular features can be rated with one to five hearts. Opera also encourages people to provide feedback and wish lists via the Opera GX forums.

Opera GX can be downloaded here. A final version is planned to launch later this year.

Opera’s team is present at E3 – To schedule a press meeting, contact us at [email protected]

Founded in 1995 in Norway, Opera delivers browsers and AI-driven digital content discovery solutions to more than 350 million people worldwide. The quickly growing company remains one of the most innovative browser creators in the world. Opera is listed on Nasdaq under the OPRA ticker symbol.