To automate tasks that create and manage files on a Secure File Transfer Protocol (SFTP) server using the Secure Shell (SSH) protocol, you can create automated integration workflows by using Azure Logic Apps and the SFTP-SSH connector. SFTP is a network protocol that provides file access, file transfer, and file management over any reliable data stream.

Here are some example tasks you can automate:

In your workflow, you can use a trigger that monitors events on your SFTP server and makes output available to other actions. You can then use actions to perform various tasks on your SFTP server. You can also include other actions that use the output from SFTP-SSH actions. For example, if you regularly retrieve files from your SFTP server, you can send email alerts about those files and their content using the Office 365 Outlook connector or Outlook.com connector. If you're new to logic apps, review What is Azure Logic Apps?

723x sml723x 7230b0 7231b0 0 SML-482 bcm97231 bcm97230 Smartlabs. Just sftp myalias would connect to the server. However, the OpenSSH sftp client does not support uploading files like you are trying to; it can only download files (using the syntax host:path) or work in interactive mode. For uploading, you need to use either the interactive mode. $ sftp myalias sftp cd /tmp sftp put db.sql.gz.or the scp tool. The knownhostsfile setting can be set during rclone config as an advanced. It has been found that this helps with IBM Sterling SFTP servers which have.

For differences between the SFTP-SSH connector and the SFTP connector, review the Compare SFTP-SSH versus SFTP section later in this topic.

The following list describes key SFTP-SSH capabilities that differ from the SFTP connector:

SFTP-SSH triggers poll the SFTP file system and look for any file that changed since the last poll. Some tools let you preserve the timestamp when the files change. In these cases, you have to disable this feature so your trigger can work. Here are some common settings:

Connection-based triggers where you need to create a connection first, such as the SFTP-SSH trigger, differ from built-in triggers that run natively in Azure Logic Apps, such as the Recurrence trigger. In recurring connection-based triggers, the recurrence schedule isn't the only driver that controls execution, and the time zone only determines the initial start time. Subsequent runs depend on the recurrence schedule, the last trigger execution, and other factors that might cause run times to drift or produce unexpected behavior. For example, unexpected behavior can include failure to maintain the specified schedule when daylight saving time (DST) starts and ends. To make sure that the recurrence time doesn't shift when DST takes effect, manually adjust the recurrence. That way, your workflow continues to run at the expected time. Otherwise, the start time shifts one hour forward when DST starts and one hour backward when DST ends. For more information, see Recurrence for connection-based triggers.

This section describes considerations to review when you use this connector's triggers and actions.

Use different SFTP folders for file upload and processing

On your SFTP server, use separate folders for storing uploaded files and for the trigger to monitor those files for processing. Otherwise, the trigger won't fire and behaves unpredictably, for example, skipping a random number of files that the trigger processes. However, this requirement means that you need a way to move files between those folders.

If this trigger problem happens, remove the files from the folder that the trigger monitors, and use a different folder to store the uploaded files.

To create a file on your SFTP server, you can use the SFTP-SSH Create file action. When this action creates the file, the Logic Apps service also automatically calls your SFTP server to get the file's metadata. However, if you move the newly created file before the Logic Apps service can make the call to get the metadata, you get a 404 error message, 'A reference was made to a file or folder which does not exist'. To skip reading the file's metadata after file creation, follow the steps to add and set the Get all file metadata property to No.

Connect to SFTP with SSH

When you add a trigger or action that connects to a service or system for the first time, the Logic App Designer prompts you to create a connection by providing the necessary information, which varies based on the connection, for example:

To override the default adaptive behavior that chunking uses, you can specify a constant chunk size from 5 MB to 50 MB.

SFTP - SSH trigger: When a file is added or modified 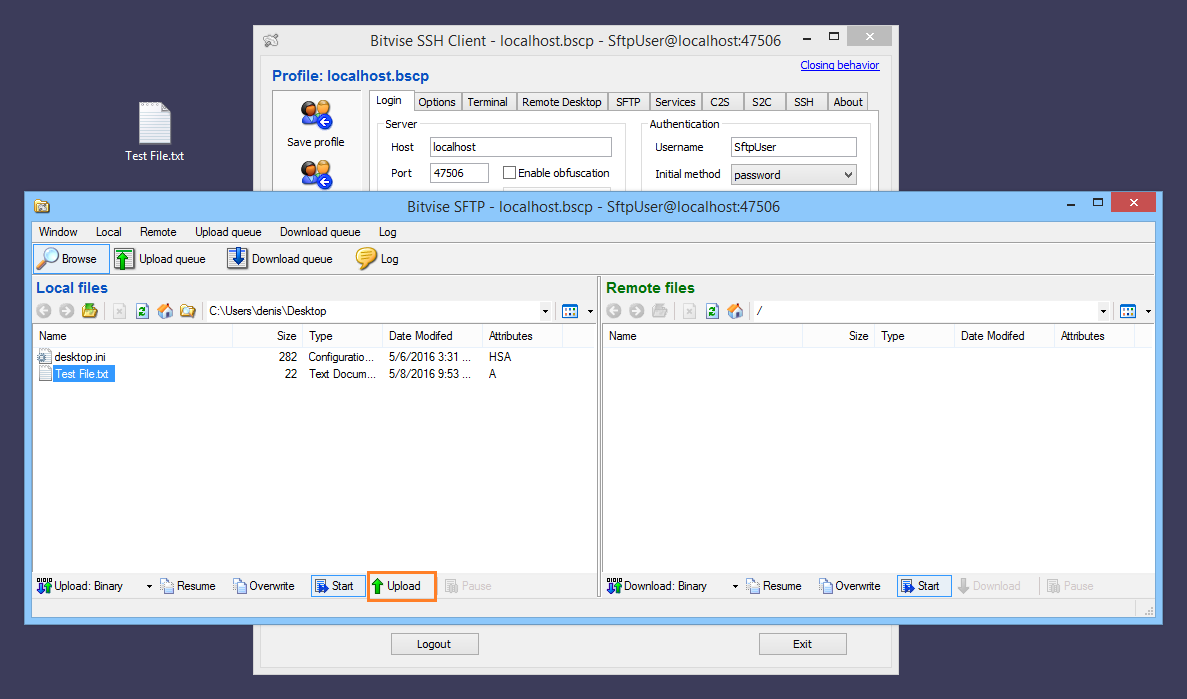 This trigger starts a workflow when a file is added or changed on an SFTP server. As example follow-up actions, the workflow can use a condition to check whether the file content meets specified criteria. If the content meets the condition, the Get file content SFTP-SSH action can get the content, and then another SFTP-SSH action can put that file in a different folder on the SFTP server.

Enterprise example: You can use this trigger to monitor an SFTP folder for new files that represent customer orders. You can then use an SFTP-SSH action such as Get file content so you get the order's contents for further processing and store that order in an orders database.

This action gets the content from a file on an SFTP server by specifying the file path. So for example, you can add the trigger from the previous example and a condition that the file's content must meet. If the condition is true, the action that gets the content can run.

This section describes possible solutions to common errors or problems.

This error can happen when your logic app can't successfully establish a connection with the SFTP server. There might be different reasons for this problem, so try these troubleshooting options:

404 error: 'A reference was made to a file or folder which does not exist'

If you can't avoid or delay moving the file, you can skip reading the file's metadata after file creation instead by following these steps:

For logic apps in an integration service environment (ISE),this connector's ISE-labeled version require chunking to use the ISE message limits instead.