SQLite is a C-language library that implements a small, fast, self-contained, high-reliability, full-featured, SQL database engine. SQLite is the most used database engine in the world. SQLite is built into all mobile phones and most computers and comes bundled inside countless other applications that people use every day. What is SQL Injection? SQL injection attacks, also called SQLi attacks, are a type of vulnerability in the code of websites and web apps that allows attackers to hijack back-end processes and access, extract, and delete confidential information from your databases. 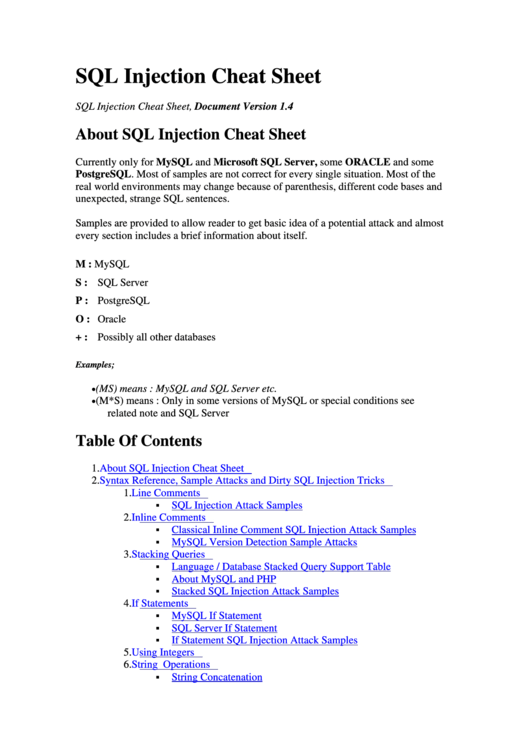 If you take user input through a webpage and insert it into a SQLite database there's a chance that you have left yourself wide open for a security issue known as SQL Injection. In this chapter, you will learn how to help prevent this from happening and help you secure your scripts and SQLite statements.

Injection usually occurs when you ask a user for input, like their name, and instead of a name they give you a SQLite statement that you will unknowingly run on your database.

Never trust user provided data, process this data only after validation; as a rule, this is done by pattern matching. In the following example, the username is restricted to alphanumerical chars plus underscore and to a length between 8 and 20 chars - modify these rules as needed.

To demonstrate the problem, consider this excerpt −

The function call is supposed to retrieve a record from the users table where the name column matches the name specified by the user. Under normal circumstances, $name would only contain alphanumeric characters and perhaps spaces, such as the string ilia. However in this case, by appending an entirely new query to $name, the call to the database turns into a disaster: the injected DELETE query removes all records from users.

There are databases interfaces which do not permit query stacking or executing multiple queries in a single function call. If you try to stack queries, the call fails but SQLite and PostgreSQL, happily perform stacked queries, executing all of the queries provided in one string and creating a serious security problem.

You can handle all escape characters smartly in scripting languages like PERL and PHP. Programming language PHP provides the function string sqlite_escape_string() to escape input characters that are special to SQLite.

Although the encoding makes it safe to insert the data, it will render simple text comparisons and LIKE clauses in your queries unusable for the columns that contain the binary data.

Note − addslashes() should NOT be used to quote your strings for SQLite queries; it will lead to strange results when retrieving your data.

In SQLite injection means injecting some malicious code to gain access to other databases while accepting the input from web application.

Suppose we have registration page where the user needs to enter username but instead of that if he enters SQLite statement then it will run on our database and return the data based on his query statement.

The basic idea for SQLite injection attacks is to get secure information from your database and to perform some vulnerable actions like updating existing records information or delete/drop tables in the database, etc.

Generally, these SQLite injection attacks can happen whenever your application relies on user input to construct the SQLite query statements. So while taking the input from users we need to validate that data before we send it to the database by defining pattern validations or accepting the input parameters in standard way.

Now we will see how SQLite injection attacks can happen and how we can prevent it with examples for that create table emp_master in your database using the following queries. Suppose in our web application we are accepting input from the user to show user details during that time if he enters query like as shown below then it will return all the records from table irrespective of employee id.

The above input will form the query like as shown below.

Here in above query WHERE 1=1 is always returning true and in OR operator one operand TRUE means, the whole condition will return it as TRUE then it will return all the records from employee table irrespective of employee id like as shown below.

This way hacker can easily get all the sensitive information just by injecting some piece of code.

To prevent this type of SQLite injection we need to accept the user input as a string and then perform the operation on the database like as shown below.

Whenever we run the above query it will return employee details whose employee id matches with “12 OR 1=1” this is one of the ways to avoid SQLite injection attacks.

We will see another example of an SQLite injection attack using batch statements.

Generally, the SQLite support semicolon separated statements which are called as batched statements like as shown following.

The above statement will return all the records from the person table and delete the table called emp_master.

In our application we are taking the input from user to show the user details based on userid that code will be like as shown below.

Here instead of entering userid the hacker can use batch of SQLite statements to inject malicious code like as shown following.

Our application will create a valid SQLite statement like as shown below.

The above statement will return a record from the person table where userid = 12 and it will delete emp_master table.

To prevent this kind of SQLite injection we need to consider user input as a string then our SQLite statement will be like as shown below.

The above SQLite statement will check for person details whose UserId = '12; DROP TABLE emp_master' and return only matched records.

This way we can prevent SQLite injection attacks in applications.